The actress says one family member threatened to never speak to her again if she didn’t take the job in the MCU series.

Debra Jo Rupp is most well known for her work on “That ’70s Show,” but she pleasantly surprised everyone when she popped up in another period piece last week: The ’50s-set premiere of “WandaVision.”

The actress appeared as the wife of Vision’s boss, who was invited to their home for dinner — a dinner that went off the rails as the titular superheroes tried to hide their superpowers from the outside world. It’s a classic sitcom setup, but one with a MCU twist.

Getting caught up on the Marvel universe, which spans 10+ years and 23 released films so far, however, was no easy task.

“’70s Show’ was a small little family … the Marvel world, as I found out, is gigantic,” said Rupp when TooFab caught up with her following the premiere. “It’s a very complicated world. Sitcoms, not so complicated. There’s a situation and hilarity ensues. In ‘WandaVision,’ nothing is as it seems I am finding out.”

The 69-year-old actress admitted she “knew nothing” about the films released before landing the role — and only knew she “had to take” the gig because her “great nephew Johnny said, ‘Aunt Debbie, if you don’t do this, I’ll never speak to you again.'”

Wise words, indeed, but ones that came with some homework.

“I [learned about the MCU] on the fly. I worked a lot up until this Covid thing, so I didn’t have a lot of time. I shot the sitcom part at their studio in Atlanta, that is just gigantic. It’s like it’s own city. So that was fascinating to me,” she said. “I watched four movies, in a row, in my hotel room one day. I got very involved. I got so involved that I can’t watch ‘Endgame.’ I feel that people die that I care about. Not so much, don’t wanna watch that!”

She also credited Elizabeth Olsen, Paul Bettany and director Matt Shakman with “explaining things I didn’t understand” once on set. “They told me which movies to watch that would catch me up on them,” she explained, adding that she was “so not prepared for Paul Bettany’s makeup.”

“I wouldn’t wanna be Vision, I would cry,” she said of Bettany’s extensive prosthetics and makeup work to get into character. “It’s amazing. That red is really red!” 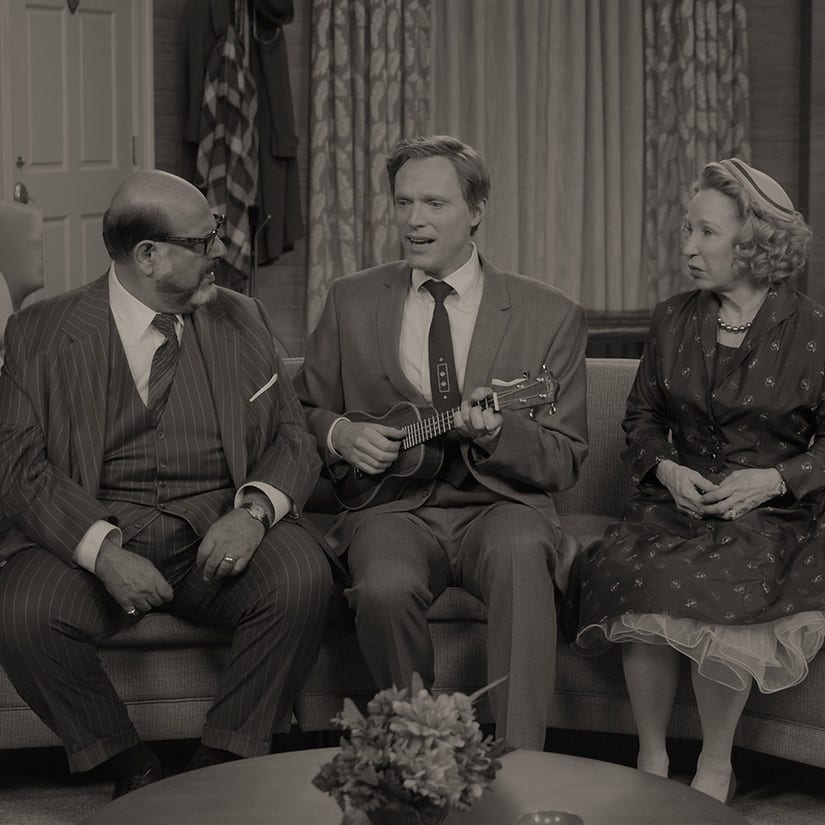 While the show has allowed Bettany and Olsen to tap into different — and more fun — sides of their superhero characters than ever before, Rupp said the two actors “are kind of like” they appear on “WandaVision.” She added, “They’re like a little goofy, Elizabeth only eats seeds, Paul Bettany is really, really funny and very physically lanky and really good. I was not surprised at all … to me, that’s them, that’s kind of who they are, charming, funny people.”

Rupp said she was only given a “very kind of general picture” of where Mrs. Hart fit into the situation and knew “some bigger things,” but is really seeing the bigger scope of things as new episodes drop. While nearly every actor in the MCU is trained to avoid revealing spoilers, Rupp said it’s been pretty easy for her to keep certain details under wraps.

“I didn’t get a lot of it because a lot of people didn’t know I was in it,” she exclaimed. “Also, my age, I’m not the one you would think of to come to … I’m not that person. I got to escape most of it!”

Fri Jan 22 , 2021
Casey Affleck is setting the record straight on Ana de Armas-cardboard-cutout-gate. ET exclusively spoke with the 45-year-old actor on Thursday, where he addressed speculation that it was him who threw out the life-sized cardboard cutout of the actress. Photos of a man placing the cutout in the trash surfaced shortly after news broke that Ana and […]