Jeannie Mai was in the hospital after discovering a potentially life-threatening condition.

The co-host of “The Real” was forced to leave the “Dancing With the Stars” competition this week after being diagnosed with epiglottitis, an inflammatory condition that can cause swelling and block airflow to the lungs.

Mai told ET Canada in a statement: “It saddens me that I will not be able to continue with the competition on DWTS. My doctors discovered a health concern with my throat which requires immediate attention and surgery. I am heartbroken that my DWTS journey has to end here. The last several weeks have been an amazing learning experience. I have pushed myself to new limits physically and mentally, and I am so proud of how far we’ve come. I can’t thank my partner Brandon enough for being so supportive and believing in me. I also want to thank MAI fans who voted every week and I wish everyone else in the competition the best of luck!”

Jeannie Mai will not be able to continue to compete on #DWTS this season due to a health concern that requires immediate attention. Jeannie has inspired us, along with millions of fans, with her energy and dedication. We wish her a full and speedy recovery. pic.twitter.com/HTgkhC5tXt

JEANNIE! I’m so sorry this happened to you! You don’t deserve it! Your journey on this show was so special so unique and so inspiring! I loved EVERY SINGLE WEEK that we got to go through this together! I hope I helped give you an experience that you’ll remember forever! We share a lot of good times, tough times and all the times in between but mainly, a lot of laughs! Mainly you laughing at me but hey I’ll take it! thank you for giving me such an amazing season! We will all be praying for a speedy recovery!

Mai later updated her fans on how she is doing, writing, “I made it safely out of my emergency surgery.”

She continued to say she is “devastated” that her time on “DWTS” has come to an end and thanked Armstrong for being her partner.

I would never imagine ever having to write this, but I made it safely out of my emergency surgery. I will be forever grateful to Dr. Nasseri who identified my potentially life-threatening condition. What simply started as a sore throat had unbeknownst to me become a dangerous infection that already closed at least 60{4fa4da6f3c1981a5931260717d32c0094736b58085ccaeb4a35ec1939b26e446} of my airway and resulted in a throat abscess that spread in a matter of 3 days. Although I am grateful to be recovering safely, I can't lie… I am devastated by the fact that my journey with #DWTS will end this way

Dancing on this show has been the most exhilarating adventure. I've gained both beautiful friendships and loving supporters. To my partner, @Brandonarmstrong, I’m sorry you don't get to make fun of my moves anymore while I gift you life gems on how to be a grown up

Love u so much lil bro, and will ALWAYS cherish the memories we made!!! And more good news? My thumbs still work hunnay, so I can spread my 20 votes across these final 8 superstar teams!!! Please everyone, TONIGHT watch for your fave #DWTS couple killen it in the ballroom cuz #TeamDreamofJeannie, we gotta share our love and VOTE!!! #TeamReachForTheSkai #TeamSellingIt #TeamLOCOmotion #TeamBriJo #TeamWillYouAcceptThisDance #TeamPrettyMessedUp #TeamBeNeevers #TeamDaNelly LEGGGGGO

How long the TV host and stylist will take to recover is still unknown, but four days after her surgery, Mai gave another update.

“No speaking. No chewing. No bad t-shirts,” Mai captioned a picture of her hospital room and her “Vote” shirt. 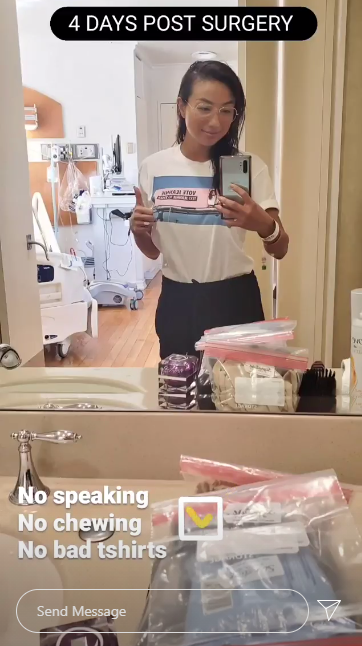 Fri Nov 6 , 2020
Images is my favorite purpose of indulging such an curiosity is sheer pleasure or refreshes the thoughts and offers a welcome change from such dull and dreary routine of day by day life.I visited a couple of good libraries and read articles and magazines with reference to pictures.Photography is quite […]