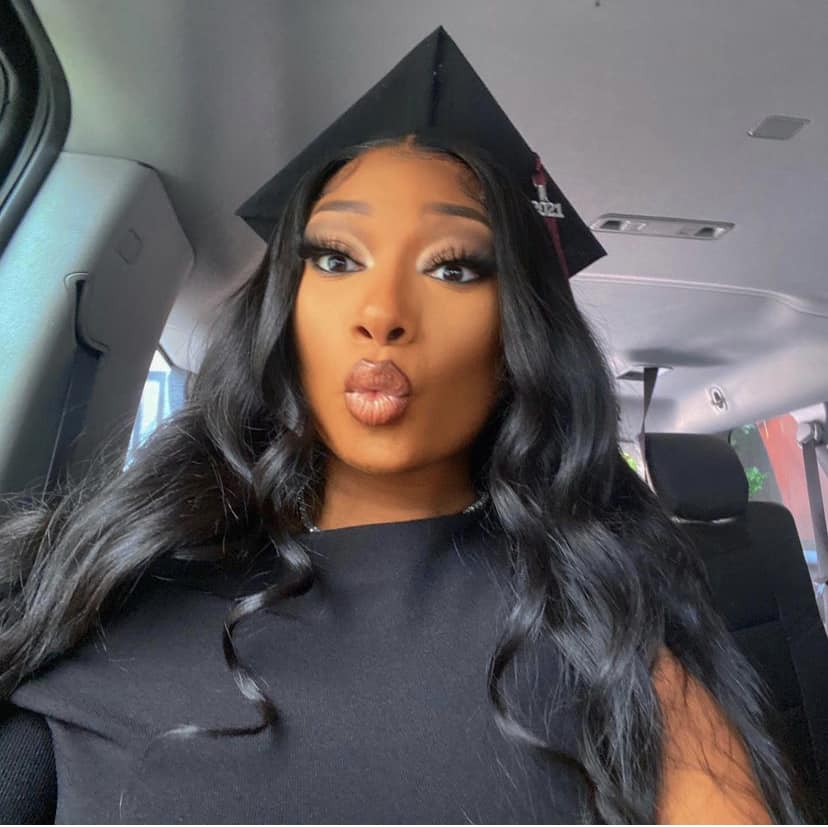 This weekend was full of accomplishments for the Hot Girl, Megan Thee Stallion! Yesterday she crossed the stage and became a graduate of the illustrious Texas Southern University in her hometown of Houston, where she received her B.A. degree in Health Administration. During the ceremony, Megan was surrounded by her peers, and it was live-streamed for her fans, affectionately known as Hotties, to watch.

Rep. Sheila Jackson Lee, who spoke at the ceremony, announced that the GRAMMY-Award-winning rapper would also receive the 18th Congressional District Humanitarian Award on Sunday. According to ABC 13, the prestigious award aims to recognize outstanding public achievements by the people who live in the 18th Congressional district. Today, Megan looked regal as she received the award in Houston!

With her boyfriend, Pardison Fontaine, sitting in the audience and others, they listened to Rep. Jackson Lee present Megan with the award. “This award has not been given out often or to many,” Rep. Lee said. “That is why it remains a special part in our congressional district. The district has almost 1 million people. When this award is given, it has that special promise and special history. We are nothing in this nation if we don’t help our fellow brothers and sisters.”

Megan took to the stage, saying, “I’m so honored. It’s my responsibility to take care of the city that took care of me. My grandma always taught me to be kind and giving. I learned that from her.” If you’re a Hottie, you know Megan always says her late grandmother and mother inspired her to get her bachelor’s degree.

The H-Town Hottie dedicated the award to her late grandmother, explaining, “I was raised by very giving women. So I want to dedicate this award to my grandma because she taught me to be the woman I am today.” Congrats Megan! We’re excited to see what you do next!

Mon Dec 13 , 2021
YouTube star and child-prodigy drummer Nandi Bushell has shared a cover of Tool‘s 1996 single ‘Forty Six & 2’. The cover, shared yesterday (December 13) to Bushell’s YouTube channel, marks the first time she has attempted to play one of the band’s songs on drums. In the description of the […]