Nicole Scherzinger has announced that The Pussycat Dolls’ long-awaited reunion tour has been canceled — and two other PCD members say they weren’t informed of the news beforehand.

On Friday, Scherzinger, 43, shared a statement on her Instagram Stories in which she wrote that the tour has been scrapped for good after it was postponed several times due to the coronavirus pandemic. Although she said she “understand[s]” why the tour had to be canceled, the girl group’s lead singer expressed that she’s “incredibly saddened” over the news. 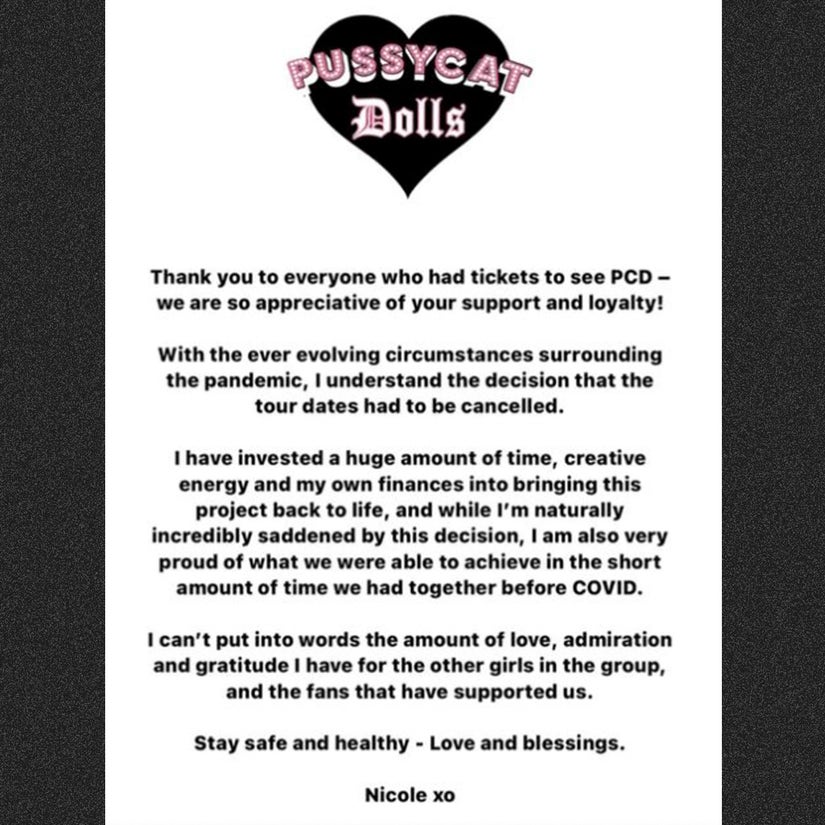 “Thank you to everyone who had tickets to see PCD — we are so appreciative of your support and loyalty! With the ever evolving circumstances surrounding the pandemic, I understand the decision that the tour dates had to be cancelled,” Scherzinger wrote. “I have invested a huge amount of time, creative energy and my own finances into bringing this project back to life, and while I’m naturally incredibly saddened by this decision, I am also very proud of what we were able to achieve in the short amount of time we had together before COVID.”

She continued, “I can’t put into words the amount of love, admiration, and gratitude I have for the other girls in the group, and the fans that have supported us. Stay safe and healthy — Love and blessings. Nicole xo.”

A few hours later, PCD members Carmit Bachar and Jessica Sutta reacted to Scherzinger’s post in a joint statement in which they said they found out the news from her announcement.

While Bachar, 47, and Sutta, 39, pointed out that there’s hasn’t been an “official notification” that the tour has been canceled, they appeared to interpret Scherzinger’s words as a confirmation, admitting that it was “not the outcome we had hoped for.”

“We want to say how incredibly disappointed we are to learn of an announcement made on Instagram that the Pussycat Dolls reunion tour is canceled. As of now, there has been no official notification of that,” they began in the message, which they both shared on their Instagram accounts. “Either way, it seems as though it’s the end of a chapter to an incredible, life altering experience filled with some awesome memories that we will forever be grateful for.”

“To the fans, we love you,” they added in the statement. “Trust us, this is not the outcome we had hoped for. We wanted it as much as you because we appreciate you all so much and it hurts our hearts you had to wait so long for an answer, but unfortunately it’s out of our control.”

Bachar and Sutta concluded their post by stressing that while the tour “may have come to an end,” PCD’s “story” and “sisterhood” will continue.

“We all had big dreams for this brand to expand especially creating the music so all of our voices could be heard, which would be true female empowerment,” the two wrote. “Thank you to all the fans that supported us unconditionally and love us to no end. We will always honor the essence of what the true definition of being a Pussycat Doll is. This tour may have come to an end but it is not the end of the Dolls story. We created a sisterhood that will live on… With love, Carmit and Jess.”

PCD’s other two members — Kimberly Wyatt and Ashley Roberts — have yet to react to Scherzinger’s post or speak out about the alleged cancelation of the reunion tour. TooFab has reached out to both Wyatt and Roberts for comment.

Meanwhile, Pussycat Dolls founder Robin Antin issued a statement as well, posting a “message to the fans” on Instagram.

“Myself and all the girls have been waiting on the re-scheduled reunion tour dates, all of us working hard to make it happen,” she began. “We have been so excited to go out & connect with such incredible fans and give them what they truly deserve.”

“All of us have made personal & financial sacrifices, but that’s what it takes to be a team player in a ‘BAND,'” Antin continued. “Let’s not forget there are 5 other members of this group who I care for deeply, who deserve to be heard. To all our beautiful fans, we’ll see you soon. We love you!”

“There are truths to this situation, I just hope one day they see the light,” she concluded, before signing her statement with her name as well as her title as “founder” of the group. She also added the hashtag, “#PCDFOREVER.”

Back in September 2021, Antin sued Scherzinger over the reunion tour, claiming Scherzinger refused to participate in the tour unless she was given a majority share of the take and final decision-making authority.

Scherzinger’s attorney, Howard King, slammed Antin’s lawsuit, calling Antin’s claims “ludicrous and false,” per People. He added that they “are a desperate attempt to divert blame for her own failures by trying to impose obligations on Nicole that simply do not exist.”

In 1995, Antin founded The Pussycat Dolls as a burlesque group. The members — including Scherzinger, Sutta, Bachar, Wyatt, Roberts and Melody Thornton — became a musical act in 2003 and took over the charts with such hits as “Don’t Cha” and “Buttons.”

After disbanding in 2010, the group came together for a new single called “React” in late 2019 and performed it on the season finale of “The X Factor: Celebrity.”

PCD’s international reunion tour was set to kick off in April 2020, however, due to the pandemic, it was rescheduled several times. And now, it seems it may very well not likely end up happening at all.

Sun Jan 9 , 2022
In a video posted on his Instagram account on Saturday, Alec Baldwin said he was cooperating with authorities in their investigation into the fatal shooting of cinematographer Halyna Hutchins on the set of the film Rust, and any suggestion he is not complying with the search warrant issued for his […]