One woman who grew up in the mansion detailed her alleged affair with one of Hef's girlfriends when she was 15 — while one ex claimed he "had tapes on everybody."

The floodgates are opening big time when it comes to the scandalous history of the Playboy Mansion, thanks to A&E’s new 10-part docuseries “Secrets of Playboy.”

Featuring interviews with Hugh Hefner’s friends, exes and insiders, the series aims to unveil “the hidden realities behind the glamorous façade of the Playboy empire over several decades,” shining a light on some of the allegedly sinister behavior that went down inside the mansion’s walls.

Yes, Holly Madison and Bridget Marquardt from “Girls Next Door” participated and you can get a full breakdown of their allegations right here. But they weren’t the only ones who made an impact in the show’s first two hours, which aired Monday night.

Much of the first episode was devoted to Jennifer Saginor, who grew up in the Playboy Mansion as the daughter of Hef’s personal physician. Calling it a “weird, f—ed up place,” she also noted that “growing up there as a kid is magical.”

As a child, she recalled thinking Hef was charming, humble and generous and felt there was a true message of equality in the mansion when it came to both race and gender. But as time went on, all that began to fade.

“Years later I started to realize that everyone in this environment put Hef on a pedestal and it wasn’t genuine. This was all an illusion,” she said. “As a little kid, I was buying it … and the feminists just didn’t get it. As time went on, I saw some of the inconsistencies, I saw the tremendous hypocrisy.”

Secrets of Playboy: Every Holly Madison and Bridget Marquardt Bombshell In New Docuseries

According to Saginor, in the ’70s and ’80s, she would sneak out of bed in the middle of the night and “see some of these girls doing things I didn’t recognize.” She added, “I would see them naked with men all around them, on the floor on all fours, they were on drugs. It scared me. The men were laughing and I just remember thinking I never wanna be like these girls, running around like they’re animals. This wasn’t about empowerment of women. It was about the breaking down of a woman.”

She also claimed that Hef would “kiss with his mouth open, in a French kiss kind of a way” when she was a teenager. Though she said she thought “it was strange,” Saginor claimed her father said “that’s what people do when they love each other.”

By the time she was 15, Saginor said she “fell in love with one of Hefner’s main girlfriends,” a woman she didn’t refer to by her real name, but simply as “Kendall.”

“I fell very hard because I was so young. Kendall was very affectionate. One night she ordered like daiquiris and one thing led to another and I think she thought I had been with a girl before,” she claimed. “It took away the loneliness at that time. From my father and Hefner’s point of view, they didn’t care about my having the affair with his girlfriends. He knew about the affair, there’s cameras everywhere.”

“When I was 17, I was called to Hef’s room. I thought he was going to confront me about the affair. She said, ‘The only way we can see each other was if you came to Hef’s room, Hef said,'” Saginor continued. “One of her friends who was also a Playmate walked me to his door and stopped me, said, ‘You don’t have to do anything you don’t want to do.’ And then I went in and Hef ordered drinks and then we were just sitting there and the energy shifted in the room and I started feeling uncomfortable.”

Saginor said she was having fun “at first,” but “didn’t realize what was about to happen.” She said she felt that, in that moment, “Hefner crossed a boundary because he always looked and treated me like I was his daughter and here I was in his room feeling this uncomfortable energy that I was no longer being looked at as a daughter.”

She said “Kendall” ran to the bathroom in tears, causing Hefner to tell her, “Now we’re not gonna do anything because she’s crying.” When Saginor reminded him that her father was right down the hall, she said Hef told her, “We’re all family here.” With that, she left.

A butler for the mansion, Mitch Rosen, confirmed that he served the two young women daiquiris and said that Jennifer was “always very infatuated with Mr. Hefner’s girlfriend.” He added, “She was very sweet, innocent. The people that knew, knew that Jennifer was underage.”

None of these claims are exactly new, as Saginor detailed her alleged experience at the mansion in her 2007 book “Playground.” She claimed that when the book came out, Hefner called her to congratulate her on its release — but had ulterior motives for catching up.

“Hef called me and said, ‘Congratulations, I heard you wrote a book, I’m so proud of you. Listen, if you could just do me a favor and not tell anybody I knew about your affair with Kendall, I would really appreciate if you kept that between us,'” she claimed. “He didn’t want people knowing a minor had an affair on his property. He said, ‘Can you fax over a list of your next interviews?’ I said, ‘Sure, of course.’ The interviews were canceled one by one.”

“It was like something out of a mafia movie,” she said. When asked what she thinks happened, she added, “I know what happened: He had someone in his office call and contact those people and stop those interviews. I was really crushed because I could no longer speak my truth.”

According to a few other women interviewed for the series, the alleged coverups weren’t specific to Saginor. 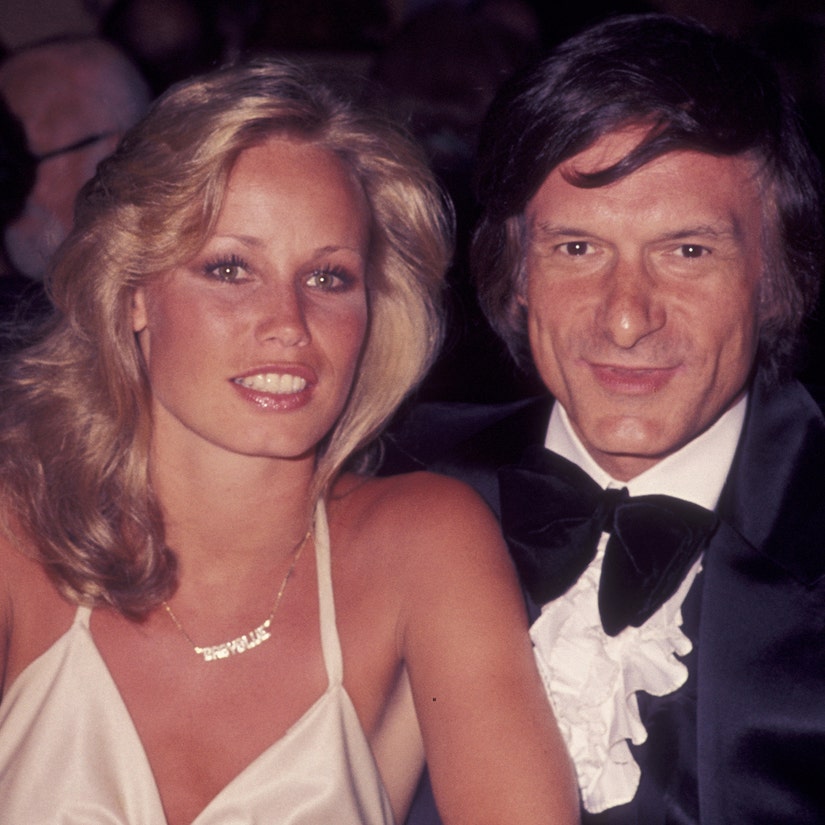 “Things were done to shut people up, get them out of the way,” claimed Sondra Theodore, Hef’s girlfriend from 1976-1981. “He had tapes on everybody. He lets the media into all these parties on purpose, because usually they end up doing something they’ll regret and he’s got that on them. So down the road, if anything was going to come out negative about him, ‘I don’t think so, remember this?'”

“We had Playmates that overdosed. There were Playmates that committed suicide,” said Miki Garcia, former Playmate and Head of Promotions from 1973-1982. “I really thought that if I wrote a book, maybe all of this stuff would go away, maybe it would stop. Hefner even sent someone to buy me off. When you get someone that powerful to be that fearful, anything could happen, anything. I had a bodyguard. I was that afraid.”

Saginor concluded that “everything you heard about Hefner and Playboy” over the years is “exactly what his PR agency wanted you to hear: a very calculated misrepresentation of the truth.”

Added Garcia: “His legacy should comprise the whole story, not just part of it that he projected. Not just the publicity machine, but from the women who experienced him.”

Hefner denied allegations made by Garcia in the ’80s and, after Holly Madison released her book, he responded with a statement that seemed aimed at any exes who ever spoke out against him in public.

“Over the course of my life I’ve had more than my fair share of romantic relationships with wonderful women,” he told Us Magazine at the time. “Many moved on to live happy, healthy, and productive lives, and I’m pleased to say remain dear friends today. Sadly, there are a few who have chosen to rewrite history in an attempt to stay in the spotlight. I guess, as the old saying goes: You can’t win ’em all!”

In the wake of the new docuseries, Playboy issued a lengthy statement to E! as well — saying that the company today “is not Hugh Hefner’s Playboy.”

“We trust and validate these women and their stories and we strongly support those individuals who have come forward to share their experiences,” said the company. “As a brand with sex positivity at its core, we believe safety, security, and accountability are paramount. The most important thing we can do right now is actively listen and learn from their experiences.”

The statement further noted that more than 80 percent of its current workforce is female, adding that the company “will never be afraid to confront the parts of our legacy as a company that do not reflect our values today.”

“We are committed to our ongoing evolution as a company and to driving positive change for our communities,” the statement concluded.

New episodes of “Secrets of Playboy” air Mondays on A&E.

Tue Jan 25 , 2022
Alec Baldwin’s attorneys argued in a filing on Monday that a lawsuit stemming from the Rust shooting in October should be thrown out because the shooting was a workplace accident. The filing marks the first time that Baldwin’s lawyers have laid out a legal argument for why he is not […]