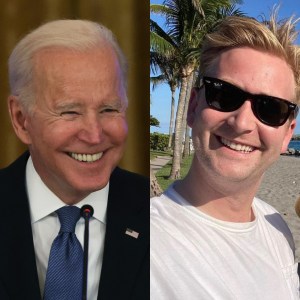 Chile! President Joe Biden may be America’s leader, but don’t let that fool you. He is not the one! He chose violence today following a press conference, and things got spicy! It started when Fox News Whitehouse Correspondent Peter Doocy asked, “Do you think inflation is a political liability in the midterms?”

President Biden didn’t spare Peter any mercy with his response, and many were shocked! “That’s a great asset — more inflation,” President Biden responded in a low voice that was heard on his live microphone. “What a stupid son of a bi**h,” he added. President Biden probably was unaware that his mic was still hot. “Doocy” quickly trended on Twitter as many people talked about the interaction.

One person tweeted, “My favorite moment of 2022 so far. @POTUS very appropriately reacting to Peter Doocy of Fox News.” Another tweeted, “Peter Doocy’s question to Biden was basically if he thinks bad things are bad for him, so yeah, it was dumb.”

While Peter continues to be a hot topic, he took the time to address President Biden’s comments on Fox News. He gave a rundown on what happened, explaining, “So I shouted… ‘Okay, what about inflation? Do you think inflation is a political liability in the midterms?’” Peter said. “I couldn’t even hear him because people were shouting at us to get out. But somebody came up to me in the briefing room a few minutes later and said, ‘Did you hear what the president said?’”

He continued, “And I said, ‘No, what?’ They said, ‘He called you stupid SOB.’ And I said, Did he say ‘SOB’ and the person said, ‘No.’” Peter laughed about the moment with his colleagues and didn’t seem upset about Biden’s comments. Roomies, do you think President Biden was wrong?

The post President Biden Goes Off On Reporter Peter Doocy Following A Press Conference appeared first on The Shade Room.

Jay Park assures fans he has “not retired yet”, teases new albums

Tue Jan 25 , 2022
Korean-American singer-rapper Jay Park has personally responded to rumours about his alleged retirement from the entertainment industry. READ MORE: Moonbyul – ‘6equence’ review: a riveting story with a dissatisfactory ending Today (January 25), Park took to Twitter to respond to the rumours, which have been swirling since the musician announced […]