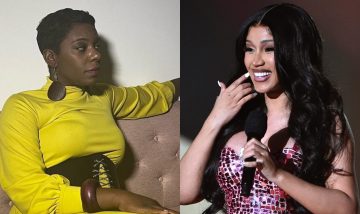 Tasha K has delivered a statement after losing the defamation lawsuit brought against her by Cardi B. A jury found Tasha K and her company Kebe Studios LLC liable on all claims on Monday.

These claims include defamation, invasion of privacy through false light portrayal and intentional infliction of emotional distress. Both Tasha and Kebe Studios are now responsible for a payout of nearly $4 million.

“These last four years fighting this conspiracy case have been extremely challenging and yet I wouldn’t change a single thing about any of it,” Tasha said in her video statement.

Tasha said she “learned so much” during the entire ordeal that came with “powerful and insightful” moments. The blogger also stated the guilty verdict was “no shock” to her, her husband or her legal team.

“We called bluff against a machine that wanted to bully me for not wavering from my personal beliefs,” Tasha K said. “A machine that has corporate interests to protect prostitution, drug use, promiscuity and to glorify the violence that wreaks havoc on our society and in our neighborhoods.”

According to Tasha K, this machine she described “secured an extremely prejudicial verdict” against her and Kebe Studios. She said the verdict was based “solely off of sympathy and payola.” Additionally, Tasha believes the case “succeeded in making [her] out to be an angry and malicious woman.” She continued on to defend her platform and company.

“This is a real business,” Tasha said. “I am a wife of 17 years, a mother to a beautiful 15-year-old girl who’s an honor student and a two-year-old son. My platform creates news and sheds light on the issues going on in our society.”

Tasha repeatedly spoke about her First Amendment rights. Later in the 12 minute-video, she denied all of the claims the jury found her guilty on.

“There was no defamation, no invasion of privacy, and suicidal thoughts and we proved that with sufficient, factual evidence,” Tasha said.

The statement is a dig at part of Cardi’s testimony during the trial. The rapper told jurors she “wanted to commit suicide” due to the false stories Tasha published about her. These stories included false allegations of prostitution, infidelity, sexual penetrative acts with beer bottles, contracting herpes and using hard drugs.

Tasha plans to appeal. This decision comes despite the fact that the jury awarded Cardi a hefty $3.8 million payout for damages, medical expenses, attorney fees and punitive damages.

“We will fight, no matter the cost or length, even if this takes years,” Tasha said.

The celebrity gossip commenter stated she’ll take the fight “all the way up to the Supreme Court if need be.” Interestingly enough, a Law360 report dated January 14 says the blogger admitted to spreading lies.

“I knew that sh*t was fake,” Tasha reportedly said in one video. “I wanted the money. This is a business. This is called ratings.”

Following the additional compensation given on Tuesday, Cardi B issued a statement about her win.

“During this trial, all of you have learned about the darkest time in my life. That moment in time was fueled by the vile, disgusting, and completely false narratives that were repeatedly and relentlessly being shared online,” Cardi said.

“I thought I would never be heard or vindicated and I felt completely helpless and vulnerable. I have never taken for granted the platform that my fame allows me to have, which is why for over three years I dedicated every resource I had to seek justice.”

The post Tasha K Says She “Wouldn’t Change A Single Thing” In Statement About Defamation Lawsuit Loss appeared first on The Shade Room.

Thu Jan 27 , 2022
Flying Lotus has shared details of his forthcoming second feature film Ash, which will contain elements of both sci-fi and horror. The film, announced yesterday (January 26), is the follow up to Flying Lotus’ 2017 theatrical debut Kuso. The musician – real name Steven Ellison – will serve as the film’s […]