The last thing she wanted to do was make her real-life husband Jeffrey Dean Morgan crack up during one very serious scene.

“The Walking Dead” gave viewers a deep-dive into Negan’s backstory on Sunday’s Season 10 finale, an episode which gave Jeffrey Dean Morgan some time to really shine and allowed his actual wife, actress Hilarie Burton, to play his on-screen other half.

While bits and pieces of his past on previous episodes, “Here’s Negan” laid it all out in a series of flashbacks highlighting his relationship with Burton’s Lucille, the namesake of his trusty bat.

Pre-zombie apocalypse, the two weren’t exactly living a life of bliss: Negan had been fired from his high school coaching job following a bar fight with a student’s dad — and, instead being there for her when Lucille was diagnosed with cancer, he was too busy sleeping with her best friend to answer her calls. Yeah, not great. 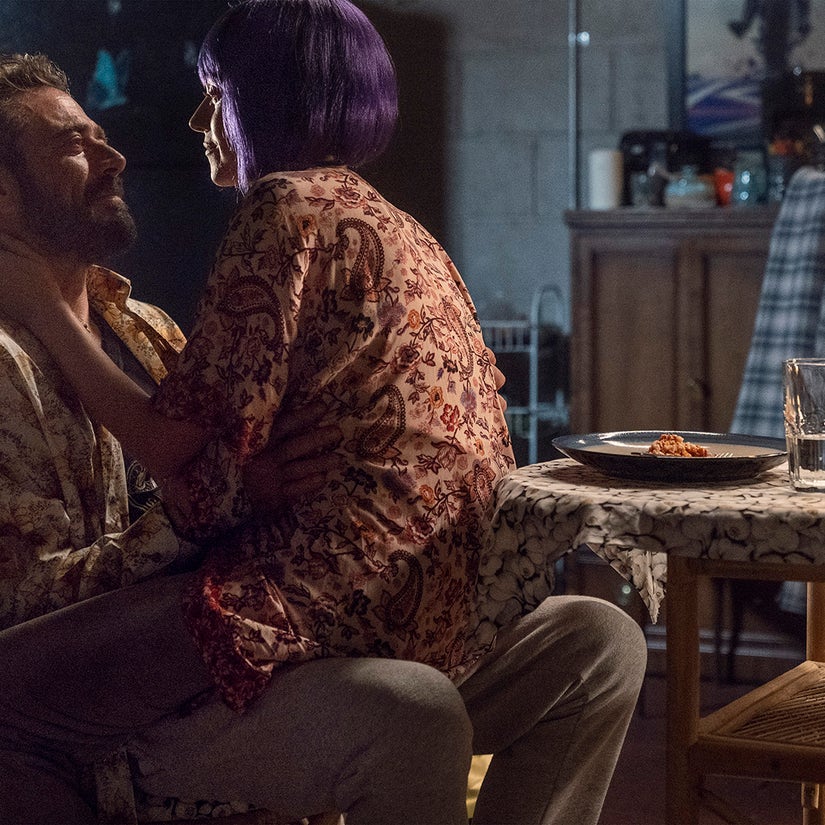 But as she battled cancer while hiding out from the walking dead, he became a new man and better husband — one who would do anything to make sure she still got her treatments. Sadly, she died while he was out trying to get her last doses of chemotherapy and — after he burned their home to the ground with her reanimated body inside — Negan donned his leather jacket, picked up the barbed wire baseball bat and killed the men who delayed his return.

As an origin story, it stayed pretty close to the source material, but having Morgan’s real-life wife by his side certainly brought even more emotion to the storyline. TooFab caught up with Burton after watching the episode, where she opened up about her biggest fears joining her husband’s show, praised Morgan’s work ethic and revealed what it was like to live in Rick Grimes’ home while filming.

Whose amazing idea was it to have you play your husband’s on-screen wife and did you have any concerns about working together on something like this?

Jeff’s been saying it for years and fans would say it on Twitter and social media and I would always act very territorial, like, ‘You’re damn straight I’m playing Lucille! No one else is gonna make him cry, it’s my job!’

Then when we got the phone call from Angela Kang and Scott Gimple late last summer, oh man, you know when you ask for something and you’ve got all that bravado — like, of course I can do that — and then you get it. Oh no, now I’ve gotta show up! The script was so good, it’s the best script I’ve ever gotten to do and I really wanted it to be great. Thankfully, my husband is just such a good scene partner. We liked surprising each other, we liked trying new things and we both like to show up really prepared and go to work, so to find that we had a really similar on set — we don’t like it too serious, there’s no point acting like a drama queen when the camera’s not rolling — it was a delight.

We really had a great time and high-fived each other at the end of the day and go home and cook dinner.

How was it for you two to film some of the more serious or emotional scenes? We find out he’s been cheating on Lucille, before she starts dying of cancer. It’s not exactly light material for a real-life couple to tackle.

We filmed it in October, at which point we’d all be in quarantine for a really long time. There were so many emotional things in the news and in all of our lifestyles, everyone was upended. Being able to tap into emotion wasn’t necessarily difficult. For me, it was more difficult to restrain because Lucille is supposed to be this, she’s the rock. She’s the sturdy one. And the first take we did of the scene where Negan says ‘We’re never giving up,’ baby, they could not use my coverage on that take because I had snot all over my face, I was a mess. The way he looked at me, I was like, ‘I never want you to look at me like this in real life.’ It was heartbreaking. But you also feel such pride in the moment, because you’re like, ‘Look at my baby go, he’s so good!’

Can you talk a little about your zombie makeover? What was that process like for you and what was your husband’s reaction when he saw you all done up for the first time?

I loved it. I loved it so much and I’m such a dork about it. I couldn’t wait. I wanted them to do camera tests, I wanted them to do it like 3 or 4 different times and they kept being like, ‘Calm down Hilarie, we do this every day.’ They gave me a little zombie lesson and Jeff didn’t see me. He wanted me to hide from him, so the reaction that you see on camera is his real reaction.

That put some pressure on me. I was so scared that he was gonna pull the bag off my head and crack up, if I was being a bad zombie. If I was being not a good zombie, I didn’t want to ruin the emotion that he’d spent all day working on. But, you know, he pulled out such a beautiful, layered performance. Getting to bear witness to that, as the person who loves him the most, that was awesome.

I’ve seen your Instagram posts, did you and your family really live on the set while filming this episode?

I feel like the production was like, what can we do to make sure they’re safe in quarantine and they’re not having to deal with transportation to and from set? So the natural decision was, let’s just put them up in Alexandria in one of the houses that they used on the set. We ended up living in Rick Grimes’ house. Paola [Lázaro, AKA Princess] lived next door, other actors lived a couple houses own. There’s only 2 or 3 inhabited houses in the whole neighborhood. It was this weird summer camp vibe, where at night, after the crew would go home, it’d still be light outside — you’d go walk the dogs on the empty streets, trash everywhere, the apocalypse surrounding us, 20 foot walls surrounding the community. It was one of the most surreal experiences ever, but definitely one for the books.

It was so meta. We’re in a real life apocalypse, we’re filming the beginning of an apocalypse in this episode and we’re living in an apocalyptic set. It’s creepy, man!

They didn’t realize — no one had ever lived in the houses before — that the shutters on the Rick Grimes’ house have deteriorated and fallen apart over the years. It’s hurricane season in October, so the wind that would pick up at night, it just sounded like someone was banging a drum against the house every night. how would anyone know that, no one’s ever lived there, we were the guinea pigs.

In an interview with Forbes, you mention that your husband, as a person, has been vilified ever since he started playing Negan. How have you seen people struggle with the line between actor and character … and do you think this episode might help humanize him?

The people who love Negan are going to love him even more and the people who hate him are going to have a hard time hating him. I’ve said a number of times, Jeffrey’s said it, a lot of people have said it, had you followed Negan from the beginning the way you followed Rick, all his decisions would make sense, they’d be justified. But because he came him halfway through, swinging the bat, it made it very hard to like him.

We’ve taken our kids to county fairs, car shows and things, people come up and they gotta say something and wag a finger at him. I love all three versions of Negan that we see in this episode, because they’re very very different and I think that’s a testament to my husband’s talent. I’m really proud of how he was able to pull it out.

There’s some bad guys in real life that play really good bad guys on TV, but it takes a really talented actor to be a kitten in real life and play a real bastard — and he’s so good at it!

What’s one thing you’d love fans to know about him, regarding how he approaches his work? Especially now that you’ve seen it more than ever, first-hand.

I’ve been able to see him prep for work for the last 12 years, but I’ve never been on set with him. That was an experience that I .. you know when something really amazing is happening in the moment and you’re like, ‘Oh my god, I’m going to remember this forever’? That’s what it felt like. He’s a really generous scene partner and he likes to make people feel good about themselves and I loved working with him. I’m not just saying that because it’s a good selling point, he’s really, really, f—ing fun. Hopefully, we’ll do it again one day.

Which wig did you keep?

Lastly, how do you think you guys as a family would fare in a real life zombie apocalypse?

I’m a prepper. I am prepared for the worst case scenario at all times. I was a kid that grew up watching Red Dawn. Oh man, we gotta prepare for the invasion! So I feel like we’d be okay. I don’t want to brag about it, but Jeff and I, we could fistfight strangers or whatever we need to do. We’d be fine!

Mon Apr 5 , 2021
A surprise win that left the winner visibly emotional. On Sunday night “Minari” star Yuh-Jung Youn took home the award for Outstanding Performance by a Female Actor in a Supporting Role in a Motion Picture. Youn’s win makes history as she is the first Korean actress to ever take the prize. […]